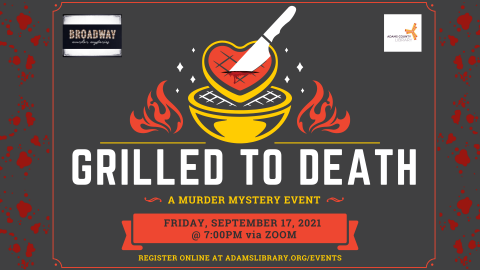 Don't forget about this event. Add it to your calendar.

Let your friends know about this event! Share it on social media.

Adults
Registration for this event is no longer open.
Allowed Ages: 18 to Over 18

Tragedy has struck the Homeowner’s Association of Muttonchops. Their beloved local butcher, Fattie Chops, has been found chopped up and frozen solid in his very own meat locker. This gruesome act of violence falls on the eve of the 45th annual Sweet Sweet Meat competition, a yearly tradition that celebrates the neighborhood's shared passion for meat consumption.

Rumors are starting to swirl around the cul-de-sac. What secrets did Fattie have behind closed refrigerator doors? Who had an axe to grind with him? Does his wife, Corny Chops, know who could’ve possibly committed this outrageous act?

Could YOU have done it?!

Our "Grilled to Death" Murder Mystery Party is an online, interactive murder mystery via Zoom. This murder mystery party combines the excitement of CLUE with the imagination of the Theatre. As with a live murder mystery party, you will be encouraged to "mingle" with other characters and go "off-script" in your quest to find who the murderer is! Participants will be given a character, costume idea, and a booklet, which will contain answers you will give as your character when questioned by detectives. During the party, your hosts will provide you with clues and evidence to help you narrow down the suspects. Use your improv skills to throw off the competition or your acting skills to conceal that the murderer is really you!

No Experience is required but you must be 18 or older to participate.

Sign up for our monthly e-newsletter and periodic e-blasts.